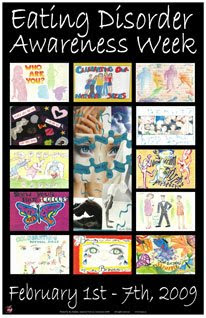 Maybe the best thing all of us can do is teach our children that just as it's not OK to touch someone who doesn't want to be touched, it's also not OK to comment on anyone else's body--positively or negatively. We have better things to talk about.
Posted by Harriet at 2:44 PM

Thanks for this post, Harriet. Teasing definitely helped trigger our young child's spiral into an eating disorder. No where near overweight, our athletic son was tall for first grade. Two smaller, lanky friends made comments about "fat" on the heels of a school Health Day weigh in. By age 9 he was diagnosed AN.

I'm with you on that one, Anonymous.

Yep, teasing is what pushed me over the edge into anorexia when I was in 8th grade. between the mixed messages I was getting from my mom at home, and the constant, horrible, merciless teasing at school I just had no self esteem left. I was convinced that I did not deserve to eat. *sigh*

I'm pregnant now, everyone asks me if I want a boy or a girl. I would love a little girl, but I hope for a boy because I'm terrified to raise a girl in this world

I think teasing led to a lot of my issues too. I remember in grade 7 this mean boy in my class called me "lumpy" and everyone laughed. And in grade 2 I was five pounds heavier than my best friend and she laughed at me. And then in high school, a bunch of jerks yelled "Hey fatty!" out their window at me as they drove by. It never ends.

Kids are mean though, I don't know if there's really anything to be done about it. I'm not trying to trivialize it because I know firsthand how awful teasing is for kids, but unfortunately I think we're stuck with it.

I wish we could end bullying too! That's a cause I'd back!

MJK, I hope you have a daughter who you raise to be strong and sure of herself,and kind because you understand the ways of this world. If it's a boy the same. Boy's get teased too.
Do I think an ED can begin after teasing? Perhaps we need to be mindful of all potential risks. My husband knew a girl who died of her ED back in the 60's. She went from a teased chubby girl to an anorexic girl who would not eat. This was long ago but he will never forget her story and he's certain it was the cruel words that brought this about. Perhaps there was more, like a diet or sickness. I don't know. I do know that words make brutal weapons and also very good tools for supporting or challenging someone to fight. So, I can't take words out of the ED argument knowing that the ED speaks like a bully. And yes, I still know that food is the best medicine to a starving person! Somehow we need to encourage with words, challenges, and love as well.