Another entry in the annals of Bad Ideas in Eating Disorders 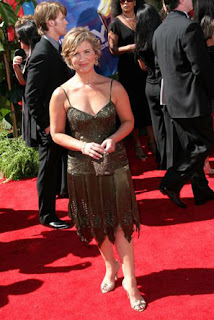 is a soon-to-be-aired reality show called, I kid you not, "Starving Secrets with Tracey Gold.

The idea is that child actress-grown-up Tracey Gold, who nearly died from anorexia in her early 20s but is now married and recovered, will meet one-on-one with women suffering from eating disorders. As the show's early PR puts it, Gold will "work with women in the grips of anorexia or bulimia as she uses her own experience to reach them in ways no one else can."

Really? No one else but this particular former actress can help these women? I knew the state of treatment was bad, but not this bad.

And who the hell gave the show this title? It doesn't sound like it's designed to help. It sounds like viewers will be treated to pro-ana tips from Gold.

I'm sure that's not her intention . . . right? Someone reassure me? Because so far I'm unconvinced.

I'm not a fan of reality shows in general, especially when they purport to stage interventions or reveal long-held secrets in a very public forum designed to entertain other people. They can't help but be exploitative-that's their whole raison d'etre. But this one sounds particularly egregious.

Britney Spears, before and after Photoshopping

If you're reading this blog, you probably know what I'd like to say about this. But I think I'll let the image speak for itself. 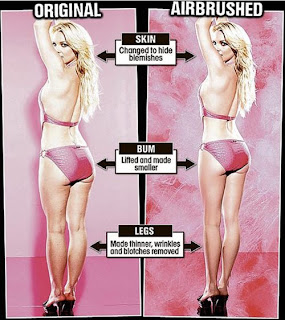