There are many roads to recovery from an eating disorder. Unfortunately, they're all hard roads. Some are longer, some are shorter, but all of them are steep and scary and require immense courage and persistence and support.

Which is why I find myself so moved by the story of Sofia Benbahmed, a young woman who's fighting through a long recovery made even longer by the fact that her insurance company refuses to cover her treatment. When I look into Sofia's face, I see my own daughter--the same spark, the same hope, and the same terror.

Please take a minute to read about Sofia and her struggle, and help her if you can--for all the brave girls out there.
Posted by Harriet at 2:10 AM 1 comment:

In my book Brave Girl Eating, I wrote about one theory of the origins of anorexia: psychologist Shan Guisinger's adapted-to-flee-famine theory.

I'm very pleased to have Dr. Guisinger writing about her theory on the blog today. I think it's a fascinating concept that deserves further thought. Please write in with comments and questions.

I’m happy that you described the adapted-to-flee-famine explanation for anorexia in Brave Girl Eating. I have found that it helps patients understand and fight their urges to restrict food and compulsively exercise.

The adapted-to-flee-famine hypothesis (2003) states that the distinctive symptoms of ignoring hunger, hyperactivity and denial of starvation were evolutionary adaptations that once helped starving hunter-gatherers make a last ditch effort to find better foraging grounds. This theory is supported by data from genetics, molecular biology and neuroimaging, yet eating disorders experts turn away from evolutionary explanations saying “we can never know for sure.” In fact, we regularly use circumstantial evidence and evidence based on probabilities to come to conclusions in science, the law, and in our lives.

For example, the criminal justice system has careful rules for evaluating circumstantial evidence because criminals rarely come forward to confess their crimes. Suppose someone were murdering teen-aged girls in your town. You would expect the police to arrest a man who had blood from the victims in his car, and you would expect a jury to convict him if the police found the murder weapon with his fingerprints, and if he had no alibi for where he was when the murders took place. How would you feel if the police let him go asserting that, without a confession, “we can never know for sure?” We would also be shocked if the judge let him go because he didn’t accept evidence based on probabilities, such as the DNA and fingerprint data.

This issue is not simply academic jousting. According to NIMH, the mortality rate for anorexia of 5.6% per decade is twelve times higher than the annual death rate due to all causes of death among young women between the ages of 15 and 25. And treatments based on the conventional assumptions have a dismal success rate. In fact McIntosh and colleagues found that patients in what was supposed to be the control group, given only nutritional counseling and emotional support, did better than those given cognitive-behavioral or interpersonal therapy which assume that anorexia is caused by psychological issues.

What is the evidence for the adapted-to-flee-famine hypothesis?

First, anorexia is now accepted as genetic. Although rare in the general population, if one identical twin has it, there is a 50% chance the other will develop it. Studies comparing identical and fraternal twins found that the increased risk is due to genetics and not to family environment. Moreover, the lack of long-term success of weight-loss programs demonstrates that without anorexia genes it is very difficult to maintain weight at 15% below normal. What anorexics do is physiologically and psychologically remarkable.

Second, denial of starvation and body size overestimation are demonstratively the result of unconscious machinations at the neuronal level. Brain imaging shows that the brain alters the reality that an underweight anorexic individual consciously perceives. When an anorexic looks at herself, her brain actively inhibits perceptual processing of visual input. This makes sense if the brain were trying to fool a starving person into thinking that she has the physical resources to travel. 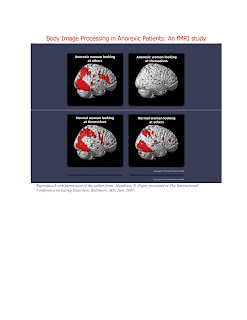 Third, neuroendocrinologists have described the complex physiological changes that enable starving people with anorexia to feel like running for miles and refuse food offered. When leptin, a hormone that tracks fat stores, falls below a critical level, it activates neuronal circuits that reduce food intake and increase activity (Muller, 2010). Chen and colleagues (2004) have identified the gene, SIRT 1, that turns on hyperactivity in starving mice.

Natural selection is the only process that can produce such a network of specialized abilities, but ED researchers explain them as the result of a hodgepodge of biological breakdowns. Each favors a different dysfunction, for example, excess serotonin, impairments in set shifting, errors in reward pathways, and breakdowns in sensory integration.

The idea that biomedical dysfunctions are responsible for anorexia nervosa does not stand up to logic. For a person to develop the standard presentation of anorexia (difficulty eating, hyperactivity and body image distortion) at least three different accidents would have to happen together. The likelihood of this is very small. Moreover, the fact that the crucial biological changes of anorexia normalize with weight restoration indicates that they are a response to very low body weight, and not the cause.

In your book you eloquently describe how hard it is to recover from anorexia. It matters why people with anorexia feel they must restrict food and exercise. It matters in order for treaters to understand and help their patients; it matters to the person with anorexia to make sense of her experience of difficulty eating, drive to move, and body image. Treatment is often ineffective because, still today, most patients, therapists and doctors believe that anorexia nervosa is caused by the patient’s willful refusal to eat due to a need for control or to trying to be model thin. Their false belief is the result of the mind’s automatic attempt to make sense of anorexia’s puzzling feelings and behaviors.

Realizing that their bodies are trying to migrate helps people with anorexia overcome their anorexic urges; and, it helps their loved ones and their therapists to understand their struggle and perhaps support them in recovering their health.