As a professor of journalism, I read a lot of media. And some days, what I read makes me feel downright ashamed of my industry. Today is one of those day, and the triggering story is this one, from the Washington Post.

The piece is written by a young woman who discusses the power of a parent's words to trigger an eating disorder. I have nothing against the writer; it's a heartfelt and I'm sure honest piece of writing. The writer attributes her three-year course of bulimia to a critical comment about her weight from her mother. The piece goes on to list "resources" for parents, presumably to prevent them from doing such things in the future.

I'm not defending this mother's comment. Far from it. I grew up in a family where comments like these were fairly commonplace; I know how hurtful they can be. My problem is with the editors of the Post, who did not do their homework. They accept this premise as if it were 100% true and present no other point of view. There's nothing in the story to contradict the notion that a parent's comment can in fact trigger an eating disorder. There's nothing on the heritability or biological roots of eating disorders, on the neurochemistry of starvation and purging. Readers are left with the sense that a stray comment, especially from a mother (always the mother), can cause the nightmare of an eating disorder.

Had the editors of the Post looked at any of the recent research on eating disorders, they might have been inspired to add another perspective to this young woman's story. Had they stopped to think about it they might have realized that if a parent's words were truly that dangerous, we'd have many more cases of eating disorders to contend with (because God knows parents say hurtful, stupid things all the time, myself included).

The irony is that this piece ran in a package along with an excellent piece written by Carrie Arnold, whose blog Ed-Bites and books are both well-researched and moving. Arnold's piece is informative, but its headline and deck--"Extreme Measures: When Kids' Size Is a Problem, Parents Seek New Solutions"--written by the editors, are misleading, possibly deliberately so. Since when are anorexia and bulimia a problem of a child's size? Hello, do the editors here know anything at all about eating disorders? Do they not care? This kind of thing perpetuates the destructive myths around eating disorders--that they are "about" appearance, that they aren't serious health issues, that they happen only to the children of overinvolved and overcritical parents.

The Washington Post's concept of families seems about as outdated--and harmful--as the photo above.

I shouldn't be seeing red right now. I should be used to this. Somehow I never get used to it.
Posted by Harriet at 2:34 PM 10 comments:

If you're anywhere near Syracuse, NY, this Thursday, please stop over at the panel discussion and book signing for Feed Me!. The book includes fabulous essays from some of my favorite writers, including Joyce Maynard (whose poignant memoir about making pie with, and then for, her mother still makes me tear up), Caroline Leavitt (who wrote a haunting piece about men, power, grief, and food), Diana Abu-Jaber (writing about the culture clash between Bedouin and American eating habits), and many others.

We'll hold a panel discussion with Mary Tantillo of the University of Rochester's Eating Disorders Program and Cris Haltom of Ithaca, both of whom speak eloquently about food, eating, and related issues. And yes, there will be cupcakes. I'm not saying they'll live up to the perky frosting on this one, but, you know, a cupcake's as good a reason as any to come out on a chilly night.

If you don't show up, I'll have to eat all the cupcakes myself.
Posted by Harriet at 4:13 PM 9 comments:

The stigma of mental illness

This piece, from my local paper, is both horrifying and provocative. The writer, Joyce Gramza, tells how her daughter, who has paranoid schizophrenia, was punished--in the hospital, awaiting transfer to a residential facility--because of her illness. It's an upsetting story.

What's even worse, as Gramza goes on to catalogue, is that her daughter's case is not an anomaly. Rather, it reflects a level of proven prejudice among doctors, nurses, and other medical professionals. Even for those who should know better, it seems, the stigma of having a mental illness can diminish the level of care, both physical and psychological.

An old friend of mine had a brother who was schizophrenic. I knew Steven as a talented musician whose dreams of becoming a composer never materialized but who made a life for himself despite his illness. Steven was in his 40s and receiving treatment for colon cancer when he died. The autopsy showed that he had literally no white blood cells left. The chemo that was supposed to help him killed him, because no one had monitored his white cell count.

Might this have happened to a patient who was not schizophrenic? Sure. But it happened to Steven. And he was not alone. The studies Gramza cites demonstrate that this kind of dropping the ball on care happens to a lot of mentally ill patients.

My hope is that more people will advocate for their mentally ill loved ones, whether the issue at hand is a mattress to sleep on or proper bloodwork. In the middle ages, people feared that they could catch mental illness from touching someone who had it. Our attitudes today, sadly, have not evolved very much.
Posted by Harriet at 11:46 AM 4 comments: 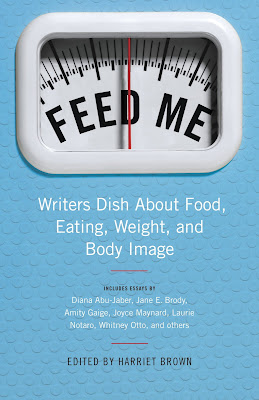 Hey y'all, I'd love to see a couple more customer reviews of Feed Me! up on the Amazon site. (Good ones are preferable, but say what you really think.) Would you consider sending one in for me? It doesn't have to be long or fancy--just whether you liked the book and why.

Thanks. Really.
Posted by Harriet at 7:47 AM No comments: