Fat and thin: It's all in your brain?

A new report from Brigham Young University suggests that women may be hardwired to worry about body image. Using functional MRI scanners, which record which parts of the brain light up while it's engaged in a task, researchers have discovered that women's brains react differently than men's to images of fat and thin. Study subjects, who were all thin, passed a screening test for eating disorders and so were presumed to have no overwhelming body image concerns.

When women were shown images of overweight women and told to imagine that someone commented that they looked like the woman in the image, a part of their brains that engages in self-reflection lit up. When looking at the images, says Mark Allen, a neuroscientist at BU, "women are actually engaging in an evaluation of who they are and whether they are worthwhile as a person. Even though women might claim to be well adjusted and not care about body issues, subconsciously they might care."

But couldn't this be the result of the overwhelming socialization American women experience on the subject of fat? Would the brains of women in a different culture--a culture that didn't put so much value on the thin ideal for women—light up the same way?

I'm not a neuroscientist, but I wonder if this study is flawed. Or maybe I simply don't want to accept that there's a biological limit to self-acceptance on this issue. 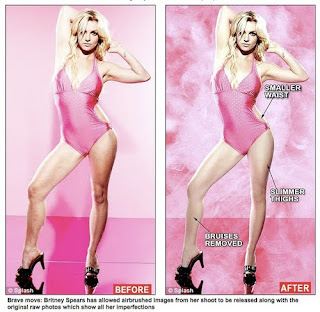 Kudos to Britney Spears, of all people, for releasing some before and after photos of herself--before and after airbrushing and photoshopping, that is. She's the latest in a trickle of celebrities doing this. It's a commendable effort, even if, as Jezebel rightly points out, the before images are still unrealistic, thanks to makeup, lighting, and other props ordinary women don't have when they look in the mirror.

Still, it's a start, a small stone rippling the surface of the unattainable thin ideal. Me, I'm hoping for the rockslide. Any day now.
Posted by Harriet at 6:13 PM 1 comment: