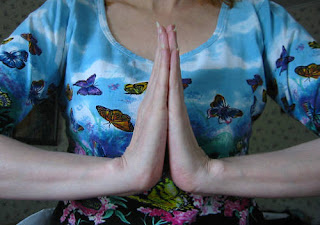 When I started this blog in 2006, I had no idea I'd still be at it four years later.

Today, the 100,000th visitor stopped by the blog. I realize that's not a huge number, given stats on the big blogs. But for a little independent blog like this, it feels huge.

So thank you to my readers, those who agree with my opinions and those who don't, those who educate me and those who merely lurk. I am richer for having you as part of my community, and I hope I've offered something back in return.

As a way to say thank you, I'm going to run a book giveaway on the site. Stay tuned for details!
Posted by Harriet at 9:21 AM 4 comments:

Don't get mad. Get out your Exacto knife.

That's what this furious citizen did when confronted by an offensive ad for thin pretzels.

Thanks to a technical screw-up by someone at Ann Taylor (I'm thinking heads will roll over this), Jezebel was able to grab screen captures of a model before and after retouching.

Here's what the site ran: 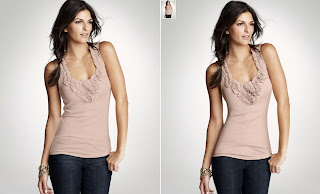 You can see the work that's been done. As Jezebel put it, the "unretouched thumbnails . . . transform [models] into ribless monstrosities."

The model on the left--the unretouched one--is beautiful, shapely, and wears the clothing well. So why, why, why turn her into the absurd image on the right? I don't think it's enough to cite the pursuit of thinness. The model on the left is already thin--you can see her ribs, for God's sake. I think there's something more at stake here. Something that has to do less with beauty-qua-beauty and more to do with how women are perceived in 21st-century America--and how we perceive ourselves.

I can't help thinking about the timing of all these retouching debacles. There was the Calvin Klein photoshop disaster: 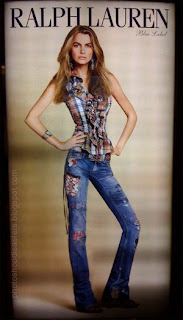 Then there was the Self magazine Kelly Clarkson debacle (see below). 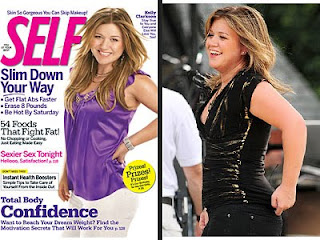 Technology has something to do with it, of course. We photoshop because we can, because human beings are compulsive changers-of-reality and even more relentless self-improvers, and can't pass up an opportunity to "iimprove" ourselves.

Except that these kinds of "improvements" are so far out of the mainstream, no one (I hope) would confuse them with reality. Which brings me back to the idea that there's something more going on here.

Women have never been as powerful in America as we are today. And even though we still have a ways to go (can you say "woman president in my lifetime?), we've made enormous progress since I was a young thing. And thanks to the Great Recession, women's work and employment levels may be surpassing men's for the first time.

And maybe that's the problem. Maybe the Trojan Horse of self-loathing embodied in images like these is meant to put us uppity women in our place. I've said it before and I'll say it again: So long as we're obsessed with our appearance, our looks, how thin we are or aren't, we're missing the boat on a whole lot of more important issues.

I can't help thinking there's a connection.
Posted by Harriet at 10:23 AM 9 comments:

Over the next few months I'll be blogging over at Psychology Today as well as here on Feed Me!. PT has an impressive roster of bloggers who tackle some fascinating issues, and I'm honored to be among them. I'll link to my posts there, starting with my inaugural post; those posts will focus on eating disorders. I'll still post here about other issues of interest.

If you head over there and read the blog, and like it, leave a comment if you would--make me feel at home there. :)