Now that we bloggers have come to represent the new media, we get a lot of the same kinds of PR stuff that used to go to newspapers and magazines--press releases about new products, upcoming events, etc. Occasionally I find something of interest.

More often, I cannot believe someone sent whatever it is my way. Take, for instance, the email I got today. Subject line (cue drumroll):

Could the Recession Be Making Us Fat?

Gee, I thought we were already too fat--in the midst of an obesity crisis, as a matter of fact. The recession's only been around a year at most. So, I don't know, no?

The email goes on with predictable idiocy to quote a nutritionist saying that in "uncertain times," people "crave rich foods." That's merely banal. The truly enraging part comes next:

"Eating disorders like anorexia nervosa and bulimia are also on the rise. "

Since the prevalence of anorexia and bulimia has been pretty constant for as long as we've been diagnosing them (about 1 percent for anorexia, 2 to 3 percent for bulimia), I'd love to know where this nutritionist is getting this shocking new information. Maybe from the bullshit fairy?

The journalist in me recognizes what we call "fudging" when I hear it, and this is pure fudge--the kind of unsupported generalization people offer up and that too many people believe because, um, it sounds like the fudger knows what he's talking about.

And here's the kicker:

"Both illnesses are tied to stress, depression and the need for control, which is a direct link to the sentiment of many Americans during this recession."

Oh really? Notice the fudging language here? EDs are "tied to" stress and depression. They sure are. So is cancer and heart disease. And then we get the twist of the knife--that old "need for control" crap that's been trotted out routinely ever since Hilde Bruch started writing about anorexia.

The whole thing is actually shopping this unnamed nutritionist as an authority on--wait for it--losing weight.

Yeah, this guy is a real authority, all right.

Note to PR flacks: Do the research before you send out crap like this. You're doing your clients way more harm than good.

The world of eating disorders treatment is changing. Slowly. Infinitesimally. Minusculely. But change is creeping in.

Still, most ED patients and their families get smacked upside the head at some point with the old assumptions and stigmas about these illnesses.

Such as: Eating disorders are caused by cold or overcontrolling mothers; the child has no other way to establish a sense of autonomy, so she stops eating.

To their credit, many docs have left this one behind. Some say they've left it behind but still on some level believe it. And now I have an inkling into why: A friend who's in med school, and who just finished the hour or two devoted to talking about eating disorders in the curriculum, reports that this outdated and discredited point of view is still in the textbooks.

So on some level, these stigmas are still being perpetuated. Big surprise, I know. But you know, it was a surprise. I'm enough of a good girl academically that reading something in a book makes it shiny and important.

I feel pissed off and sad, though, at the thought that this kind of perspective is still living out there in print, for new generations of baby docs to read and take in. Especially since most of them get almost no training in treating eating disorders anyway. So this might be all they take away from med school on the subject. And it's wrong.
Posted by Harriet at 5:51 AM 11 comments:

Of food revolutions and politics 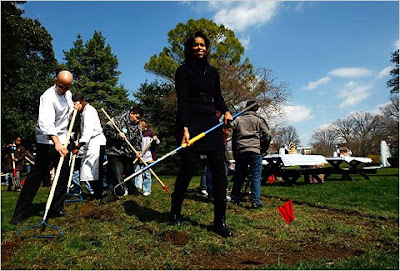 This article in today's New York Times poses the question of whether the time is right at last for a revolution in the way we grow, buy, distribute, and eat food. A perfect storm of factors, argues the writer, is brewing to make this happen: Economic hardship, political leaders who value sustainability and an older-school farming ethos, and an ever-more-complex web of relationships between those who grow food and those who eat it.

Is it, as Michael Pollan has suggested, time for a reform of our entire food system? Is this the moment to move toward the Alice Waters model of growing and eating local? I hope so. 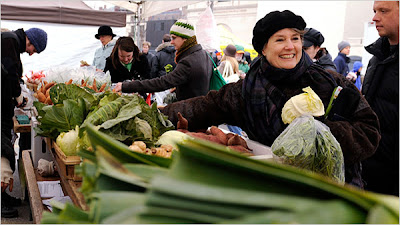 The agribusiness lobby has had Washington's ear for the last eight years. I hope the new administration can hear something else now--the concerns of small family farmers, organic farmers, parents who want to feed their children (and eat themselves) high-quality food. One of the biggest obstacles to meaningful food reform in this country has been the fact that only the relatively wealthy have access to good food. So I'd like to see policies that broaden that access and make it possible for poor and inner-city consumers to buy local fruits and veggies, organic meats, and food that's grown to taste good rather than to last 4 weeks in a crate on the back of a truck.

Why am I writing about this here, you might ask? Because eating local food, organic food, food that bloody well tastes good, is a crucial part of learning once more to celebrate and enjoy food. It's a back door into my obsession with the joys of eating and of being comfortable with your body.
Posted by Harriet at 1:39 PM 5 comments: