Would you rather be fat or have a mood disorder? Win a prize!

Because those are your two choices, if you listen to the hype around the latest in the slew of anti-obesity sweepstakes entrants, known generically as taranabant. Amid the hysterical buzz that's been making the rounds online, we're now beginning to see mention of "psychiatric side effects." This Scientific American article describes side effects as "nausea, vomiting, and moodiness," and goes on to explain that taranabant is what's known as a cannabinoid antagonist, meaning it blocks the receptors in the brain that are activated by cannabis sativa, or pot. So instead of giving you the munchies, this drug takes away appetite; instead of calming, it "activates," or makes people irritable and anxious.

But wait--I have a better idea. And you can win a prize! Keep reading.

Can me say first how much I hate the photo and headline that ran with this story, too? 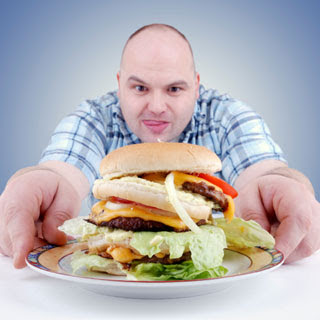 The head was "New Diet Drug in the Battle of the Bulge," and it ran with this image.

My interpretation of the phrase "battle of the bulge" is people who want to lose 10 or 20 or 30 pounds—who want to be in the lower end of their setpoint range rather than the higher end. This is hardly what even the medical profession would label "obesity." I suppose this image is better than the one that ran with a report on a site called Dogflu.ca., which I'm not going to reproduce here because it's so exploitative.

I think we need an anti-anti-obesity drug marketing campaign, and drugs like this give us the perfect material. We could start by resurrecting the old "This is your brain on drugs" ad campaign. See the fun that's possible?

Let's have a little friendly competition, in fact. You write a clever tagline to go with this new drug, and I'll send a prize to a couple of lucky winners. Ready, set, go.
Posted by Harriet at 8:45 AM

See, that burger looks great to me. Veggies, meat, cheese, bread...I don't see anything wrong with it. And, I guess...that's what's wrong with me! HORRORS!

a clever tagline, hm?
o.o...um how about "Taranabant: Because food is bad."

Or how about "Taranabant: If You're Fat, We Want You To Hang Yourself."

Taranabant: because food is OUT and EMO is IN!

Taranabant: Helping you Hate Yourself

Taranabant: Because nothing tastes as good as anxiety feels.

Taranabant: not quite a palindrome, but twice as effective!

Taranabant: Medicate your self esteem away!

Taranabant: Helping your waistline (and your sanity) quietly slip away...

I think it's interesting that Taranabant has "ana" (as in, pro-ana?) in the middle. Perhaps a little Freudian slip? Or maybe it's just me...

Didn't we do this already? With the poor pretty girl who took her meds, alleviated her mental illness, and gained weight? *shudder* *horrors*

I'd actually rather have teh kittehz and puppehz work on a drug than these morons.

I'm with letitshine. I don't eat white bread, but the rest of that looks like a lunch I'd eat 3 hours before trying to get through one of Sarita Allen's punishing 90-minute Pilates Tower classes. 'Cause it just takes that much energy.

I know the whole thing with making food a crime for women - and some men - has to do with the strictures of the patriarchy, but I don't have the willpower to jump through that ranthoop just now.

No Willpower!! Suck it, patriarchy! Hahahaha!!

that dogflu site always has the most horrible photos. And it seems they're always the one chosen for the "obesity epidemic" headline photo on google news. Ugh.

and yeah, that cheeseburger looks good.

Oh, and I went to the Dogflu site (partly 'cause I couldn't believe someone would name a site that).

Did you all see this?

"The Merck drug proved very effective, as participants lost more than 8lbs during the 12 week study."

seriously man, that cheeseburger does not look unhealthy to me, and I'm glad others are seeing that too!


and...um...pick the caption winners! haha. just cuz i want to see what teh prizorz is

wait, i've got another one

Taranabant: You may get suicidal, but at least you'll leave an attractive corpse!

Taranabant:Helping fatties punish themselves since 2007.

Taranabant: All the effects of severe hunger without that pesky desire to eat!