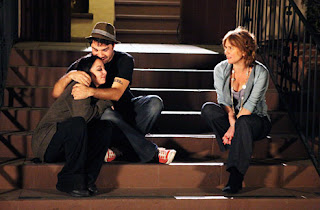 Sincerely,
Bridgette
Posted by Harriet at 6:21 AM

Hi Bridgette
Wow. You have reconfirmed just what I thought. I only hope that other young people are as strong as you. I agree regarding the possible risk this program may be taking, the title iself is very troubling. Even thought I have not watched the program. I too wonder if the program may trigger more harm then good?
Harriett: Great posting.Bridgette is a very articulate and strong young lady. Her insight is wise. I wish her good health.

Mother Bear Caring for her cub

Isn't it amazing how, if you so much as advertise a nice dress in a size 16 or so, you're "promoting obesity", but you can have a tv show demonstrating tips on starving and there's such little outcry?

Bridgette,
I think you're right about the show being potentially triggering. I haven't watched it (I'm in Australia, and if it's been aired here at all, I haven't heard about it), but I can't help but wonder from the way they've titled it if some people isn't going to take some kind of instruction from it: people who have never had problems with mental illness often don't seem to understand that making logical arguments doesn't work. From what I gather about the program, it's less about helping people with EDs and more about patronising them.

I couldn't agree with you more.
I know for a fact that for me personally it would be a trigger.

I haven't watched the show, and never ever intend on doing so. Just the title is enough to make me cringe and look away. I was watching "Entertainment Tonight" a while ago, and all of a sudden, it aired the "advertisement" to promote the show. I wanted to flip the channel so badly but my mom was intrested in hearing what it was about. I glanced at the tv screen for about 5 seconds before I had to look away, the show and topic just brought back soo many flashbacks and bad memories of when I was struggling with my eating disorder. It also made me beg the question why they were airing the promotion video for it on "Entertainment Tonight". I dont see people struggling with Eating Disorders as something that should be regarded or catergorized as entertainment. I truly believe this show is going to produce more harm than good.

Kate, you raise an excellent point. And that's part of what happens when you sign up to be on a reality show. You have no control over how your story will be portrayed or spun--as entertainment, as lesson, as oddity.

I was covering my ears and going "blah blah blah" as the promo was aired because I couldn't stand hearing about the show any longer. I was highly disturbed by the promo (which included someone making herself throw up). I told my mom the show is not worth watching, but she kept watching the promo, with a mesmerized look on her face. I mean, in the promo, they were talking about weight loss (in numbers) as well as clothing sizes and other things that I see as huge triggers to those struggling with Ed, and just a major annoyance to those who are recovered. I wanted to tell my mom that she doesnt even need to watch the show to know what life with an Ed is like because she watched me go through that same hell.

I agree with Kate. Eating disorders are not entertainment. Ever.

Can you imagine the outcry if they made a reality show about people with terminal lung cancer?

Or have they already done that?

I shudder to think, Mary.

I have to chime in here. As a recovering bulimic, I often feel the same way as Bridgette when it comes to not wanting to be triggered by these types of shows/movies/whatever. Here's the thing though - a large part of eating disorders are genetic. Meaning, while outside sources and environment can play a HUGE role in eating disorder development, you already have to be lined up to get one, you know what I mean?

Now, I haven't seen the show so I'm definitely not defending it but I think if it's done right (which I have heard that it isn't), documentaries on eating disorders can help to dispel so many of the myths surrounding them and maybe lead to some actual awareness. Then again, it's a thin line between exploiting and teaching sometimes.

I agree with you that there's a balance between raising awareness and exploitation. And also that you have to have the genetics for an eating disorder to be triggered. I think that's the argument--that the show is triggering for people who are vulnerable. And that it is more exploitative than consciousness raising.

Glad to hear you're in recovery!