What do you expect from the research journal Obesity?

This is what you get, at least on the cover of the journal's November issue: 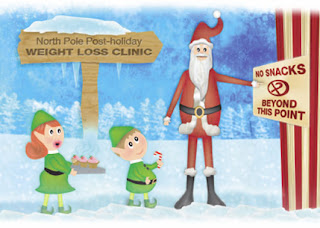 I don't know about you, but I think Santa looks kind of grim. Ill, even. Someone should tell him that physical activity and fitness are a lot more important than weight. He might want to read up on the fact that being heavier later in life isn't such a bad thing, that in fact weight loss later in life isn't a good idea. So long as he stays active, making and delivering all those gifts, he'll likely live to a ripe old age whatever his weight.

Someone should give that guy a cupcake.
Posted by Harriet at 9:42 PM

i know this woman who makes some damn fine muffins, or at least that's the word from the elves... maybe they aren't sharing.
check the list twice dude and git yur cupcake err muffin. no, really, i insist.

They would have Santa get a new thin identity. Rats! He would be joining other fictional dieters like Aunt Jemima, the Quaker Oats guy, the Campbell Soup twins, and plenty of other icons who lost virtual weight years ago, and kept it off. I suppose the Michelin man can't be downsized because after all, round tires is what he is all about.

As you say, what else would you expect from that journal?